By flhadmin on May 20, 2013 in Animals, Hunting and Fishing, Institutionalized Animal Cruelty 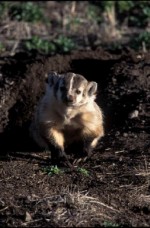 Human greed coupled with hardness of heart and indifference to the suffering of animals is the primary cause of institutionalized animal cruelty, and in this case the killing of badgers. The badger photo is from Animals in the Wild: http://animalsinthewild.org

British Environment Secretary Owen Paterson said, “badger culls are set to go ahead later this year after final licence conditions were met.” Under the plans, badgers will be shot in the open without first being trapped in cages, which is current practice. Ministers want to hold a pilot badger cull to halt the spread of tuberculosis to cattle.

In this last statement we see the human caused problem for both the cattle and the badgers. If humans ate a plant based diet as God originally commanded us (Genesis 1:29-30), and did not crave the flesh of cattle or other animals, there would be no reason to kill the badgers.

Furthermore, since the ministers are conspiring either directly or indirectly with the cattle farmers to kill the badgers, they all are in essence committing premeditated murder, which we believe is the true meaning of Exodus 20:13.

And the murdering of innocent animals doesn’t stop here; for all who eat the flesh of the cattle are in essence paying the farmers to raise the cattle and send them to slaughter, which makes them co-conspirators with the farmers and government officials to murder the badgers and cattle.

Euphemisms like cull, hunt, shoot, fish, meat, and even kill, are ways obscuring the truth about what these hard of heart humans are really doing; they are committing murder.

If we really want the suffering and exploitation of animals to end, we will eat only plant foods and become vegan.