Visit the all-creatures.org Home Page.
Write us with your comments: [email protected]

By Bruce Friedrich on Alternet.org

Although some people still attempt to justify foie gras production, science backs up common sense: Shoving pipes down birds' throat several times a day and pumping them so full of food that their livers become diseased and balloon up is detrimental to their health. One of the foie gras farmers in Caro's book uses the metaphor of an Olympic athlete to explain the force feeding process -- normal ducks just eat, but these ducks EAT. But the metaphor breaks down in that these ducks are not super-ducks, they haven't been in training, and their bodies can't take the Olympic expectations. Imagine taking an inactive population and forcing them to run marathons -- that's a fair metaphor. 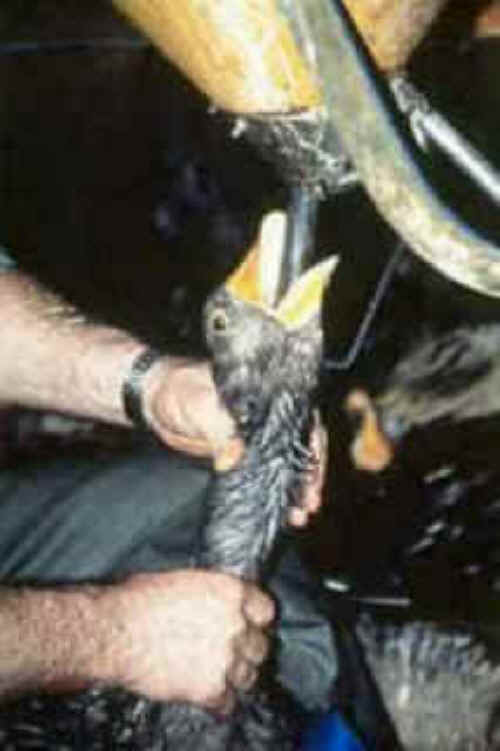 To whit, Caro cites a meta-study (by the European Union's Scientific Committee on Animal Health) showing that death rates during force feeding skyrocket by 10 to 20 times; imagine any process that causes a population's death rate to be 1000 to 2000 percent greater than normal. Of course, every animal is in misery for the entire horrid ordeal.

According to scientific studies, the birds who don't die suffer from impaired liver function, skeletal disorders, and other serious illnesses. Many become so sick they can barely move. Carcasses show wing fractures and severe tissue damage to the throat muscles.

Caro's book is a fun, fast-paced, personality driven look at the foie gras industry. He is fair -- in terms of personalities -- to both sides. What the book is not, disappointingly, is a review of the scientific evidence regarding foie gras production. In fact, Caro talks to very few scientists, and to not one of the many poultry experts who have studied and then condemned foie gras production as cruel. And beyond the one reference to the fact that 10-20 times as many ducks die during force feeding than would die normally, he completely ignores the ample scientific indictment of the foie gras industry.

For example, Dr. Ian Duncan, a consultant to the Canadian government and poultry industry who literally wrote the poultry regulations in Canada, explains that "[f]orce feeding quickly results in birds that are obese and in a pathological state, called hepatic lipidosis or fatty liver disease. There is no doubt, that in this pathological state, the birds will feel very ill."

Dr. Duncan further explains that the regular insertion of a feeding tube damages the birds' esophagi, which exacerbates the painfulness of each force feeding, and that "[t] he birds' obesity will lead to myriad other problems from skeletal disorders to difficulties in coping with heat stress, and all of which are accompanied by feelings of malaise."

Dr. Christine Nicol, a consultant to the British poultry industry and government, and a professor at the School of Veterinary Science at the University of Bristol, says, "My view on the production of foie gras is clear and supported by biological evidence. This practice causes unacceptable suffering....It causes pain during and as a consequence of the force feeding, feelings of malaise as the body struggles to cope with extreme nutrient imbalance, and distress due to the forceful handling. The most extreme distress is caused by loss of control of the birds' most basic homeostatic regulation [survival] mechanism as their hunger control system is over-ridden."

In other words: All the birds are sick, vast numbers to the point of death. And it's these scientific facts that explain why every reputable animal protection group in the world, including many that do not advocate vegetarianism, condemns foie gras as cruel, from the RSPCA to the World Society for the Protection of Animals (WSPA) to the Humane Society of the United States to (of course) PETA.

Some in the foie gras industry have argued that foie gras is a target of convenience, asking why animal groups don't go after chicken farms, as one example. This shows a lack of research (or intentional deceit): Every group that is actively opposed to foie gras is even more actively opposed to modern poultry farming. But the fact that you condemn one practice as horribly abusive should not give a pass to another one (imagine if we applied this standard to human rights causes). It's the proverbial straw man, and while it makes sense for the industry to use this argument, it's disappointing to see reputable journalists parroting it.

No one who professes to care about animal welfare can defend forcing pipes down birds' throats two or three times a day and pumping up to 4 pounds of grain and fat into their stomachs until their livers enlarge to ten times their natural size (livers expand from about 70 grams to about 700 grams-or more, as well-documented by Caro).

Biological facts -- which have been completely lacking from a few recent articles defending the industry -- show beyond any doubt that foie gras production is cruel. Kind people are duty bound to oppose it.