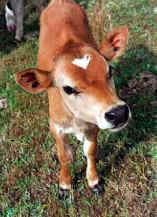 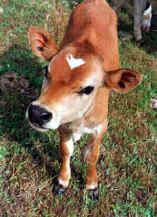 Visit the all-creatures.org Home Page.
Write us with your comments: <[email protected]>

Foie Gras: The Awakening to the Evils of
Duck and Goose Liver Pate
By Mary T. and Frank L. Hoffman

We have always found it interesting that people who participate in evil and depraved practices also end up degrading themselves.  The production and consumption of foie gras is one of these degrading practices. 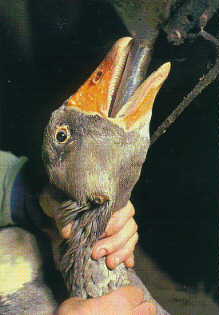 Most young children seem to want to make friends with animals.  Millions upon millions of people bring animals into their homes as companions (pets), and are horrified when they hear of such animals being mistreated.  The reason we are horrified is that our sensitive natures consider such mistreatment to be evil.  We wonder, "How can a person degrade themselves to the point of being able to inflict pain and suffering upon another living being?"

Ducks and geese feel pain and suffer just as much as we do, and just as much as our companion animals (pets) do, yet to produce Foie Gras, we torture them by force feeding them for nearly a month.  (Photo-left: A goose having a feeding pipe forced down its throat.)  We believe that only morally deficient and insensitive people could do such a thing.  The results of this depravity are extremely sick ducks and geese with diseased livers.  Then, human beings, who consider themselves to be gourmets, degrade themselves by paying exorbitant amounts of money to eat these diseased livers.

(Photo-left:  This is a picture of a normal goose's liver (left) as compared to a diseased and fat-laden liver used to produce foie gras.)

Thankfully, other people are awakening to the evils of foie gras and other animal derived foods and by-products.  The forced feeding of geese and ducks has been banned in the countries of Germany, Denmark, Norway, Sweden, Finland, England, Switzerland, Austria, Poland, The Czech Republic and Australia.  Italy has passed a law to ban forced feeding by 2004.

Thanks in large part to letters and calls from concerned and morally sensitive people, Chef Marty of Loews L'Enfant Plaza Hotel in Washington, DC said that foie gras will not be part of the DC Dining Society's annual Great Foods of the World Holiday Banquet this year (2001), as had been previously planned.

Israel passed a law that says that ducks and geese can be force fed, but only humanely, which is an impossibility.  So, in reality, by still allowing forced feeding, Israel has done nothing, and neither has the United States.  The fact that we consider most interesting about the United States and Israel is that most of their people consider themselves to be followers of the Bible.  The food laws and practices of these nations show them to be just the opposite: they don't follow God's teachings.

The Jews are violating their laws of Kashrut, and the Christians are ignoring their Jewish heritage and the Hebrew Bible, which they have incorporated into their Bibles.  As an example, when God gave humans the concession to eat animals (Genesis 9:3), He also put limitations on such practices:

It is time for every moral and God-loving human being to put an end to such evil practices as those involved in the production of foie gras and other animal foods and by-products.  Even better, Go Vegan!  Stop eating animals and their by-products, and stop wearing their skins; for all these things come to us through pain and suffering.

Your comments are welcome:

The calf photo on these pages is from Farm Sanctuary with our thanks.