By Kimberly Hosler on April 24, 2018 in activism, Animals, Vegan Living

I participated in protesting animal testing at Charles River Lab in Kingston, NY on Sunday April 22nd. The protest was hosted by NY Farm Animal Save. This was their 17th protest at Charles River Lab (CRL), who is the world’s largest breeder of animals for use in experiments. Half of all animals used in lab experiments are supplied by CRL.

“They also conduct painful tests on animals for companies that produce industrial chemicals, pesticides, food additives, and pharmaceuticals. In these tests, the animals are force-fed test compounds, have experimental chemicals smeared onto their shaved skin, and are forced to inhale toxic substances. The animals may endure severe abdominal pain, diarrhea, convulsions, seizures, paralysis, and bleeding from the nose, mouth, and genitals before they ultimately die or are killed.

CRL is the second-largest importer of nonhuman primates into the U.S., bringing in thousands of monkeys who have been stolen from their homes in the wild or bred on decrepit monkey factory farms.”[1] 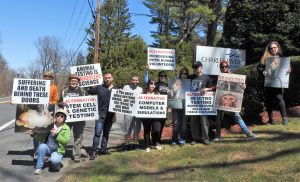 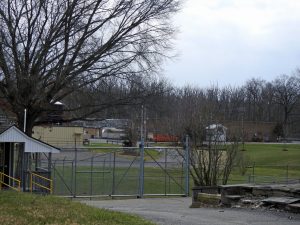 The entrance to Charles River Lab 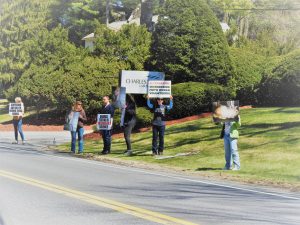 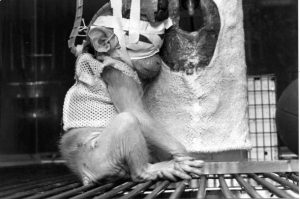 Hundreds of millions of nonhuman animals are used as resources every year in experimentation in universities and laboratories throughout the world. Rats and mice, hamsters, rabbits, gerbils, dogs, cats, pigs, cows, sheep, reptiles, trout, primates, a diversity of bird species and many others suffer our experiments of biology, biochemistry, physiology and psychology…

…we inoculate them with viruses, alter their DNA, impregnate them and kill the pregnant mothers so we can study their fetuses, we submit them to starvation or electric shocks to test their resistance, burn them alive, apply irritants to their eyes and skin, we block their glands, force them to inhale toxic substances, provoke paralysis, and submit them to radiation and extreme temperatures.

ALF (The Animal Liberation Front) removed Britches (pictured in the last photo above) from the laboratory on April 20, 1985, when he was five weeks old. Britches was a stump-tailed macaque who was born into a breeding colony at UCR. He was removed from his mother at birth, had his eyelids sewn shut, and had an electronic sonar device attached to his head—a Trisensor Aid, an experimental version of a blind travel aid, the Sonicguide—as part of a three-year sensory-deprivation study involving 24 infant monkeys. (read more about Britches)

Since they, just like us, are sentient and the emotions and sensations they feel matter to them just as much as ours do to us, they should be able to enjoy a free life.

The good news is that you can stop this happening from nonhuman animals! Buy from companies that do not test on animals, attend protests, donate your body to science after you die, and educate others.

Animal Rights at the Women’s March in Albany, NY
Bible Commentary Under Construction