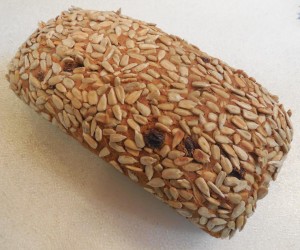 Add the ingredients, with the exception of the sunflower seeds and 1/2 the apple juice, to a mixing bowl or to the bread maker container. Once the flour has been added, hollow out the center of the flour slightly and place the other ingredients in the depression. (NOTE: If you fresh grind the grain, and the flour is warm, do not preheat the apple juice.) Mix and kneed the mixture adding apple juice as necessary.  The total kneading time for the spent barley cinnamon raisin bread dough should be approximately 20 minutes.

Place a thin layer of Sunflower Seeds on a bread board or clean counter top.  Place the dough on the Sunflower Seeds and form into a cylinder about 1/3 m. (12″) long.  Cut in two pieces and reform into a loaf making sure that the entire surface, including the ends are coated with the Sunflower Seeds.  Final length should be slightly less than the length of the baking pan.  Place in two 12 cm. X 24 cm. (4-1/2″ X 9″) bread pans.

Bake for approximately 35 minutes.  When the crust is firm, but not crispy, the cinnamon raisin bread is done.  Remove the baking pans from the oven.  The seeds should keep the bread from sticking to the pans, though the loaves may need a little help from a flat table  knife or spatula.  Let cool on a wire rack.

See a complete list of our other bread recipes:
http://all-creatures.org/recipes/bread.html

Please take a look at our main web site: https://all-creatures.org