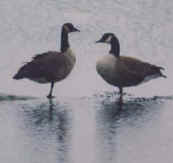 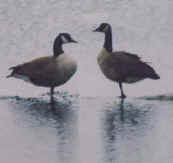 Sadly, a dead great horned owl was recently found dead, apparently shot, in the Guilford/Stony Creek, Connecticut area.  Someone had no respect for this protected bird.  Rachel Carson, in The Sense of Wonder, maintained that the most important gift we can instill in our youth and retain in ourselves is wonder and awe for the natural world; for life.

If we can do this, such travesties against nature should not occur; nor tragedies of youth shooting other youth. I was reminded of this at a holiday gathering, attended by someone who had lived within five miles of Columbine when the shootings occurred. This person posed the question: What are we going to do for our youth, to help them live more peacefully in this world?

Photo caption: Sometimes what is portrayed as conservationism can be promoting prejudicial attitudes not helpful to children.  A well-known children's nature magazine, for example, called the Canada goose a "big troublemaker."

From The Peace Education Center at Southern Connecticut State University, Dr. Cynthia McDaniels, Director, speaks hopefully of successful efforts in schools from different regions of the country. The focus is on not only conflict resolution with others, but also practices for achieving peace within.

Another idea is offered by the Reverend Olivia Holmes, of Norwalk, Director of International Relations for the Unitarian Universalist Association in Boston. She defines her work with religious and political leaders around the world as not only building communities with conflict resolution skills, but also crystallizing groups on projects based on common need.

For example, it is predicted that, by the year 2010, there will be 40 million orphaned children of HIV infected parents. Reverend Holmes cites this situation as an urgent problem that calls for the efforts of people of many denominations, races, and ethnic origins. She helps gather them together, to cooperate and collaborate on meaningful projects. When these leaders go back to their communities, hopefully they will involve youth. This is encouraging. Still, we need to learn to live in peace, not only with ourselves and other human beings, but all of life on this planet. Earth and cultural historian Thomas Berry, in "The Great Work," claims our major evolutionary task in this era is to learn to relate in subjectivity with all of life.

Berry is deeply concerned about our society's destructive patterns, which not only are eliminating entire species but even disturbing the very geophysical processes which sustain this planet. He recommends renovating our capacity for relatedness; to participate with the rest of life in a more intimate mode.

Then we will see, and feel, the effects of our actions on other life - becoming more insightful, empathic, and appreciative of other life. The presence of any form of life, then, is seen as an opportunity, and opening for insight. In recent articles, I have shared stories, as well, of creatures that are playful, creative, responsive, perceptive, curious, compassionate. Archaic assumptions that animals and plants are unintelligent or unfeeling, in human terms, have been challenged by a host of writers and researchers.

Research indicates that often, people who become murderers of other humans were torturers of animal life in their youth. So it is somewhat surprising to consider that a certain biopolitical movement actually encourages violence with other life. A recent newsletter from a conservation group, for example, described Boy Scouts' participation in ripping up barberry, autumn olive, and other "non-native" plants in a local area.

Ironically, some of the plants now being destroyed to favor a new orientation were actually introduced by wildlife biologists because they are fine food sources for wildlife. Now, killing them off is depicted as community service. Even a National Wildlife Federation publication for children has been teaching youth to look out for alleged "alien species." Ranger Rick (5/99) told kids that "There are at least 4,500 species of aliens now living in the United States, including mammals, birds, fish, insects, and plants." It defined "Alien species" as "...animals and plants that move into a place where they have never lived before. They often cause big problems for native species - the ones that have always been there."

Some conservationists may also denigrate "native" species. The same children's magazine told kids, regarding the growth of local Canada Goose flocks: "...a beautiful wild bird has turned into a big troublemaker."(12/96). This issue condoned intolerance and violent actions directed at the wild geese, quoting a Minnesota scientist: "no one wanted them...so we finally rounded some up and turned them into goose burgers..."

From such literature and activities, children may look with suspicion, intolerance, resentment, and even rage, at the natural world around them. What will be the long-term effects of such attitudes?

Each of us needs to grapple with the implications of everything we are teaching our youth about their relationship with the natural world - in school, and in the greater community. And then, find ways to promote affiliation. 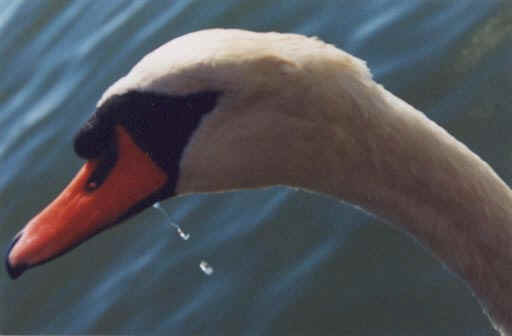 Getting a taste of God's creation as it should be!

This site is hosted and maintained by:
The Mary T. and Frank L. Hoffman Family Foundation