On Thursday, January 31st, Chrissie Hynde led a PETA protest against the horse-drawn carriages in Central Park. This is a representative sampling of the great press coverage. CBS, Newsday and on Gawker -; NY Daily News; MTV; ContactMusic.com; ValleyWag. It was also on the local news TV stations in NYC. 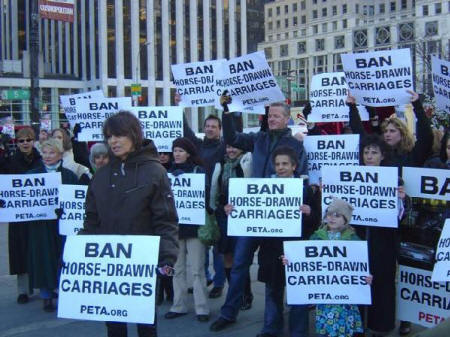 METRO - She may have married in a romantic horse-drawn carriage in New York in the 80s, but rocker Chrissie Hynde is now changing her tune. The Pretenders' front woman led a protest against the horse-drawn carriages at Central Park by People for the Ethical Treatment for Animals (PETA), encouraging tourists not to be taken for a ride and supporting a Bill, which seeks to ban horse-drawn carriages in the city. "I got hitched in a Central Park carriage, but now I'm calling for a carriage-horse ban," Chrissie said. "Learning about how horses have died in accidents and seeing their pathetic night stalls got me to change my tune about carriage horses. I love horses and hate seeing them reduced to beasts of burden in one of my favourite cities in the world." Chrissie joins P!nk, who's also campaigning for horse-drawn carriages to be banned. "It honestly hurts my heart when I think of what those horses must be feeling, as far as anxiety and fear, and how unnatural and wrong it is for these animals to have blinders on, trotting up and down on concrete, while taxis blare and people scream," said the 28-year-old singer. "It's absolutely unnatural and ignorant of us to continue this outdated tradition. What about this is romantic?" 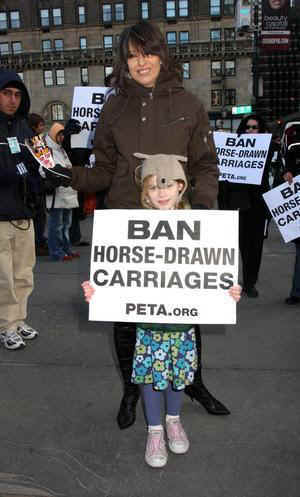 Horse Talk - New Zealand - 2/1/08-
Chrissie Hynde joins New York carriage-horse protest. Singer Chrissie Hynde joined with Peta on Thursday, January 31st leading a protest in Central park movement in New York to ban horse-drawn carriages from the city. Last month fellow musician Pink added her voice to those who support the ban, and featured on a Peta billboard in the city. Hynde, who has joined forces with Peta, said: "Learning about how horses have died in accidents and seeing their pathetic stalls have caused me to change my tune about the carriage horses". The banning of horse-drawn carriages from the city started with the Coalition to Ban Horse Drawn Carriages. And last year a less-than-rosy report by New York's Comptroller has added momentum to the movement. Legislation backing a ban was introduced by New York City Council Member Tony Avella, and os joined by council member Maria Del Carmen Arroyo, Melissa Mark Viverito and Annabel Palma. The Peta-Pink billboard will be in Times Square for a month, and already the campaign has been hailed a success. Huge press coverage in the US has ensued, with Pink being interviewed by various media, including Associated Press Television, Reuters Television, RTL German TV, CBS, Access Hollywood, BBC Radio. Independent Television News), Gothamist AceShowBiz, Popcrunch, and SkyNews.

Return to Horse Drawn Carriages
Return to Animal Rights Articles
Return to all-creatures.org Home Page
The calf photo on these pages is from Farm Sanctuary with our thanks.