Some major cities across the globe have already banned the carriages, including London, Oxford, Paris, Toronto, and Beijing.

Mayor Michael Bloomberg and City Council Speaker Christine Quinn stand by the industry, which they say is part of the New York City experience and multibillion-dollar tourism industry. However, if the bill passes the state Legislature, they won't have much say in the matter.

NEW YORK—In light of two recent accidents involving horse-drawn carriages in New York City, animal-rights activists have held a slew of rallies and press conferences to call for a ban on the carriages.

Groups such as the Coalition to Ban Horse-Drawn Carriages (CBHDC) began fighting what they call an inhumane industry years ago. After the two incidents in July, CBHDC brought the issue forth with renewed zeal.

On July 16, a horse got spooked near Central Park and bolted for a couple of blocks before crashing its empty carriage into a vehicle. No one was hurt in this incident, but several were injured in another collision on July 25.

Jack Hidary passed by after that collision occurred; he sent CBHDC photos of a toppled carriage and a taxi with a crumpled front end. The taxi appears to have rear-ended the carriage. 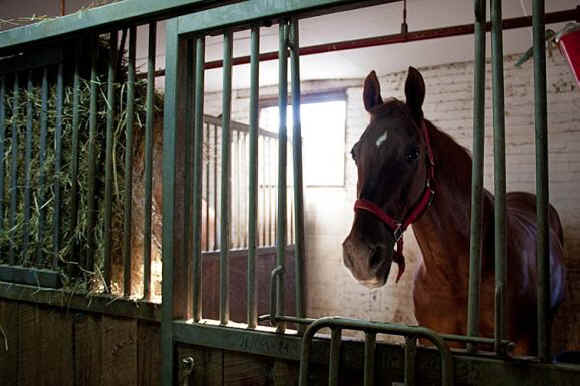 A HOME IN THE CITY: Arnie the carriage horse stands in his 10-foot-by-10-foot home at the Clinton Park Stable on West 52nd Street and 11th Avenue. He lives here part-time, spending about five months of the year on a farm in Pennsylvania.
Image by Tara MacIsaac, EPOCH TIMES

“[It’s] just one more example of how it’s too dangerous—plus the fact that it's an inhumane practice for the animal. It’s just too dangerous to have them [horse-drawn carriages] in Midtown traffic,” said state Sen. Tony Avella on Sunday in response to the July 16 accident.
The state senator’s comment came only a day before the second accident would occur.

Avella introduced a bill to ban horse-drawn carriages in any city within the New York state with a population of 1 million or more. Assemblywoman Linda Rosenthal introduced a companion bill in the state Assembly.

Some major cities across the globe have already banned the carriages, including London, Oxford, Paris, Toronto, and Beijing.

Mayor Michael Bloomberg and City Council Speaker Christine Quinn stand by the industry, which they say is part of the New York City experience and multibillion-dollar tourism industry. However, if the bill passes the state Legislature, they won't have much say in the matter.

The City Council passed legislation in the spring of 2010 to ensure the safety of the horses. Elizabeth Forel, president of CBHDC, says this did little to help the horses, as it simply codified practices already in place, without adding any additional insurance.

According to a Crain's New York Business poll of 627 readers conducted at that time, 78 percent of respondents believed that horse-drawn carriages should be banned.

McHugh stands by his industry and says that the recent accidents are not proof that it should be shut down.

“Any other mode of transportation in this city, whether it be taxis, bicycles, all of these other accepted sort of forms of getting around town are all extremely more accident-prone [than horse-drawn carriages],” McHugh asserted. He owns four horses and has been in the New York City carriage business for 25 years.

Forel has a list of reasons she says the industry is inhumane: “the too-small stalls; multi-storied stables; no turn out to pasture; not enough water in the parks—none in Times Square; no consideration for humidity index or wind chill factor; working in a crowded congested city; breathing in car exhaust; working between the shafts of their carriages for nine hours a day, seven days a week.”

As McHugh opened up the doors to his stable and walked past rows of horses nibbling on fresh hay or drinking from a dispenser that the horse activates itself, he addressed many of the arguments activists, or as he calls them “the anti's,” make against the industry.