Carriage Horses: No Voice and No Choice 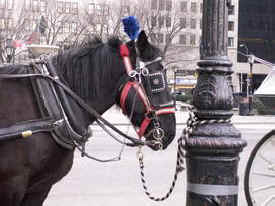 If you live in New York City, most likely your exposure to horses is to the “famous” NYC carriage horse. They are famed more for being a contrived icon, reflecting past times when people did not think so much about how the animal felt but rather how they felt as they fantasized they were one of the wealthy riding in a horse-drawn carriage -- maybe riding on a snowy night. How lovely and romantic … but not for the horse. Times are different now, and there is no need for horses to pull people around, especially in one of the busiest cities on the planet.

Many people are much more aware of animal cruelty and suffering nowadays and do not want to be a part of it. Carriage horses never have a nice day. They do not have the option of saying yes or no. Pulling tourists is their job - a job that was forced on them. As prey animals they are conditioned to protect themselves against potential threats - real or perceived - and to react quickly. That is why we often hear of horses spooking and bolting into traffic to get away from their source of fear, which can be a loud noise or even a rustling leaf. They are massive in size and strength, and as they gallop down a congested street they can cause injury and death to themselves and others. 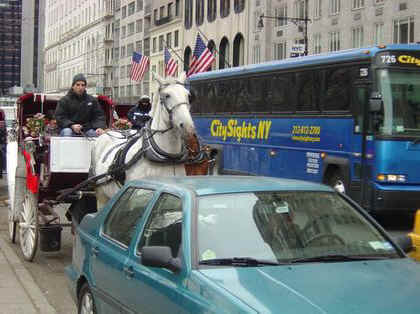 Working tightly restrained between the shafts of the carriage and wearing blinders, horses are denied their most basic instincts, even the ability to scratch an itch. By law, they may work nine hours a day, seven days a week. They are supposed to get a 15- minute break every two hours but this law is not enforced.

During the holiday season, the horses are worked till they drop from exhaustion as one did on December 4th on 59th St. This was the fourth in a series of incidents that began on October 23rd with the death of Charlie Horse who collapsed and died on West 54th Street (pictured below right). Charlie's death was followed a week later by a horse who spooked and bolted onto Central Park South, running scared through traffic until he finally crashed his carriage on Seventh Avenue. On November 4th, a horse named Luke collapsed on West 60th Street. These slew of recent incidents has brought needed attention the cruelty inherent in the carriage-horse industry, and more support for a ban.

Horses forced to pull carriages have a rough, miserable life. After pulling heavy carriages for hours on end in all weather extremes the horses go back to their stables on the far west side of Manhattan-- there are four stables. Their stalls are generally on the 2nd floor, accessed by a very steep ramp. The minimum stall size by law is only 60 sq. ft. which is less than half of what experts recommend, which is 144 sq. ft for standardbreds and 196 sq. ft. for the larger draft breeds. This is barely enough room to lay down. For these poor horses, there is no pasture to graze in the grass.The next day, they are pulled out of the stables and put on the job again -- wearing blinders and heavy tack, between the shafts of their carriages. This is truly a miserable existence.

There are many alternatives to riding in a horse-drawn carriage in Central Park in NYC. Depending on the season, consider walking through the beautiful park, renting a bike, having a picnic, renting a boat at the Boathouse, or going ice skating on Wollman Rink (or just watching the skaters). If you want an interesting, fun ride around the park and city, consider taking a pedicab ride.This is an open rickshaw type vehicle, pedal driven by the driver.The people who drive these vehicles choose to do this work unlike the carriage horses. So choose an activity that you and your family can be proud of, one that doesn't involve animal cruelty.

There are two animal sanctuaries, both about two to three hours outside of New York City, that are a must see. If you have kids, take them, they will love it! Many rescued horses live out there lives in peace, comfort and are treated with love and respect at the sanctuaries.

1) Equine Advocates in Chatham, NY has about 80 equines, which include some adorable donkeys, a couple of grumpy Llamas, pygmy goats and a host of horses rescued from all kinds of horrible situations. Some worked in the Premarin industry where their urine was used to make hormone drugs for women. Others came directly from the kill auctions, break downs from the racetrack. These animals now get to live out their lives in a natural, safe environment allowing them to socialize with each other, something so necessary for herd animals as horses are.

2) Catskill Animal Sanctuary is the other heaven on earth in Saugerties, NY. They have several horses at Catskill, but you can also meet pigs, goats, sheep, chickens -- and you can do a farm tour with president, Kathy Stevens. They also host many fun events throughout the year so check the calendar!

Check with both organizations first before going there since they close during certain seasons. But it is absolutely worth the trip. Kids will love it and they get it.They are introduced to animals in a natural environment and the respect and understanding comes naturally.

It is hard to learn respect for animals when one sees them in bondage in such cruel conditions. They appear like automatons with little expression or spirit. They are commodities used to make money. Most of the driver/owners consider the horses beasts of burden with no needs or desires of their own. To them, they are just “work horses” - a means to an end. But in a natural supportive environment, these horses will blossom...as evidenced by the picture below.

Bobby rolling when he first got off the trailer.
Photo by Jim Craner

Did you know that horses are vegetarians … actually vegans? Technically, they are considered herbivores, consuming grass, fruits, vegetables, oats, grains and barley. Yes, equines are very cool. Prey animals by nature, horses are gentle, sensitive beings. Carrots and apples are like candy to them. Many even like peppermints and beets although heir steady day- to-day diet consists of grains and hay. But they never, ever eat other animals. It is just not in their peaceful nature. This along with their size and strength is why the horse is the most abused domestic animal.

Since 2006, The Coalition to Ban Horse-Drawn Carriages has been campaigning to shut down the inhumane and unsafe carriage horse trade in New York City. It has been a long hard struggle but it is getting more and more attention and support. Other major cities including London, Beijing and Toronto, to name a few, do not allow the commercial carriage trade.And in Oxford, England, the local Council recently voted to deny the carriage business the right to work

Please visit us online at the Coalition to Ban Horse-Drawn Carriages and sign our petition to support legislation that is in the State legislature.

Let’s all stand up for these horses. They deserve it.