By flhadmin on January 8, 2013 in Animals, Bible, Violence 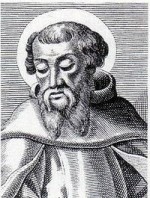 When we look at Christianity today, we see that it’s filled with violence: our warring madness that pits one nation against another, and our exploitation of animals. Together they kill millions of humans and more than 100 billion land and sea animals every year.

This was not the case before the time of Constantine. Prior to this time, many Christians were vegetarian and against all forms of violence, including war.

“But the law of liberty, that is, the word of God, preached by the apostles (who went forth from Jerusalem) throughout all the earth, caused such a change in the state of things, that these [nations] did form the swords and war-lances into ploughshares, and changed them into pruning-hooks for reaping the corn, [that is], into instruments used for peaceful purposes, and that they are now unaccustomed to fighting, but when smitten, offer also the other cheek.” (The Ante-Nicene Fathers, Vol. I, reprinted 1977, p. 512)

Irenaeus is telling us that they were actually living a peacemakers according to what Isaiah wrote (Isaiah 2:4) …

4. And He will judge between the nations,
And will render decisions for many peoples;
And they will hammer their swords into plowshares, and their spears into pruning hooks.
Nation will not lift up sword against nation,
And never again will they learn war.
NASB

…and what Jesus taught us in Matthew 5:39

39. “But I say to you, do not resist him who is evil; but whoever slaps you on your right cheek, turn to him the other also.
NASB

Just think about something:

If we never trained for war, and never played war or other violent games, or even considered killing any other living being, let alone eating them, just as Irenaeus and these Bible verses teach us, no one would ever think of slapping us on the cheek, and we would never have to offer the other one for them to slap, for we would all be living as peacemaking children of God, just as all Christians should.