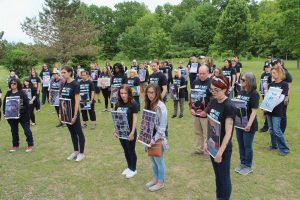 NARD participants during the moment of silence. Photo by Abbie Stoner

The National Animal Rights Day (NARD), despite its name,  is actually a global celebration, with events happening from Los Angeles, California, to Mumbia, India, to Albany, New York.

The Albany NARD event, hosted by the Albany Vegan Network (AVN) and sponsored by Vegfund.org, Primal Strips, Tofurky, Honest Weight Food Co-Op, and Alternative Baking Company, kicked off just before noon this past Sunday at The Crossings Park. After the vendors toting vegan and cruelty free products and messages set up their tables beneath tents to protect them from the impending rain, participants were welcomed to pick up their T-shirts and listen to the bagpipes played by Ally Crowley-Duncan. Ally’s bagpipes were, of course, made of manmade materials rather than the animal skins that are traditionally used for the bag of the instrument.

Though the gloomy weather—overcast skies and a chilly humidity lingering in the air—could have been seen as an omen for the day, that didn’t stop dozens of people from coming and going, resulting in a crowd of around a hundred visitors by the day’s end. But, personally, I think it was the exact opposite. I came clad in my chevron printed rain boots, ready to wade through mud since my Weather Kitty app told me there was a 100% chance of rain; however, the rain held off until it was time for the event to wrap up, proving even Mother Nature was ready to stand up and speak out for the rights of the millions of animals slaughtered and mistreated every day.

And she wasn’t the only one speaking up. After Ally’s bagpipe serenading, various speakers addressed the crowd, which included dozens of individuals all dressed in their blue and black shirts and holding up pictures of deceased, innocent animals as a visual reckoning of harm done. At other events, actual dead animals provided by veterinarians and humane societies were held up by participants to provide an even more evocative and gut-wrenching display. This forces viewers to come face to face with those directly affected by the atrocities which the various speakers lamented about. 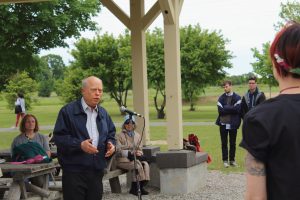 Albany’s speakers began with Pastor Frank Hoffman giving a truncated sermon on the hypocrisy of blessing animals. “We are blessing the animals,” he assured the crowd, “if we feel their pain and contribute to ending it. It’s not the words, it’s the actions and the feelings—that’s what blesses the animals.” His words, followed by a recitation of “Then Silence,” a poem by Tammy C. Smith about a young animal torn away from its mother for slaughter, left hardly a dry eye. The sniffling continued and was joined with a few chuckles as Kathy Stevens, founder and executive director of Catskill Animal Sanctuary, took to the stage to lift the spirits back up with a story about a disgruntled sheep who helped to save some forgotten turkeys.

After a moment of silence for the already lost and currently suffering animals, AVN Vice President Kimberly Hosler read the Declaration of Animal Rights, which participants of the event were then invited to sign to pledge their dedication to ending animal suffering. Other speakers included Jeff Lydon from Woodstock Farm Sanctuary, a moving reading from poet Gretchen Primack, and introductions and opening remarks from AVN president Sarah Shearer. Further musical performances were provided by Thee Vivacious Vegan and Simple Souls. 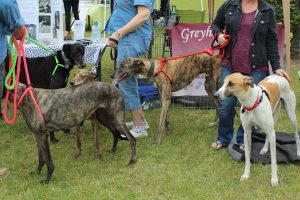 The dogs of Greyhound Rescue of New York. Photo by Abbie Stoner

Between speakers, guests mingled in the warm and welcoming environment, learned about the dangers and abuse faced by elephants in circuses from decades-long advocate Donna Reynolds, and met the friendly pups from Greyhound Rescue of New York. Guests were also encouraged to visit vendor stands to sample vegan pizza provided by Little Anthony’s and passed out by the folks from Imagine Desserts, body lotion from Lush Cosmetics, and fresh coffee with a splash of milk alternatives from The Happy Cappuccino.

By the time the rain started to wet the grass around four PM, all eyes were dry as connections were made among attendees and hope was bolstered for the future of the animals of the world.

Abbie Stoner writes about queer girls, magic, and magical queer girls. She is the copyeditor and proofreader for All-Creatures and her work has been published or is forthcoming in Crack the Spine, Slink Chunk Press, Dirty Words, and Stonehenge II. When she’s not writing or talking about intersectional feminism, she can be found doing tarot readings and avoiding cilantro at all costs. Visit her website to learn more.