You are here: Home › Christian Perfection – 13: In What Sense Christians Are Not Perfect

Christian Perfection – 13: In What Sense Christians Are Not Perfect

By flhadmin on May 2, 2013 in Bible, Christian Perfection

Christian Perfection – 13: In What Sense Christians Are Not Perfect

In the twelfth part of “A Plain Account of Christian Perfection”, John Wesley discusses the dichotomy of Christian perfection by addressing “in what sense Christians are not perfect”, as compared to, “in what sense they are perfect”. Obviously, something that is perfect cannot, at the same time, also be imperfect, that is, unless we are talking about the two realms of our existence: physical and spiritual. It’s as Jesus said of the true believers in John 17:16, “They are not of the world, even as I am not of the world.” But, with our physical bodies, we are bound to the world with all its corruption.

I think it was in the latter end of the year 1740 that I had a conversation with Dr. Gibson, then bishop of London, at Whitehall. He asked me what I meant by perfection. I told him without any disguise or reserve. When I ceased speaking, he said: “Mr. Wesley, if this be all you mean, publish it to all the world. If anyone then can confute what you say, he may have free leave.” I answered: “My lord, I will,” and accordingly wrote and published the sermon on Christian perfection.

I personally found this comment quite interesting, because seven years later John Wesley had to once again defend Christian perfection to Dr. Gibson in a letter written 11 June 1747.

“(1) In what sense they are not. They are not perfect in knowledge. They are not free from ignorance, no, nor from mistake. We are no more to expect any living man to be infallible than to be omniscient. They are not free from infirmities, such as weakness or slowness of understanding, irregular quickness or heaviness of imagination. Such in another kind are impropriety of language, ungracefulness of pronunciation, to which one might add a thousand nameless defects, either in conversation or behavior. From such infirmities as these none are perfectly freed till their spirits return to God; neither can we expect till then to be wholly freed from temptation, for ‘the servant is not above his master [Matthew 10:24].’ But neither in this sense is there any absolute perfection on earth. There is no perfection of degrees, none which does not admit of a continual increase.

Let’s discuss one of Wesley’s points in a little more detail. He wrote: “They are not perfect in knowledge. They are not free from ignorance, no, nor from mistake.” We also know, for example, that ignorance of the law is no excuse for disobeying it. It may have been an honest mistake, but, nevertheless, the law was broken. The “law-breaker” didn’t have knowledge of that portion of the law, and thus failed to comply with it. This is a sign of our imperfection, and the fact that we are not omniscient (having total knowledge, as does God). However, if we deliberately refuse to learn about something, because we don’t want to have to follow it or change our behavior, it is no different than making that “mistake” through premeditated intent, in which case it is no longer a “mistake”, but a deliberate sin. The same sinful condition would apply to a person who doesn’t want to know about some unpleasant aspect of life, so he or she doesn’t have to do anything about it. In such a case they become a participant in the wrongful act.

If a person, who claims to be a born again Christian, has a character flaw in which that person deliberately and repeatedly sins in this manner, then we may well question their claim of being born again, because they exhibit no evidence of the presence of the Holy Sprit in their life. When the Holy Spirit indwells believers, He convicts them of the things that are counter to God’s will, and encourages those things which are. 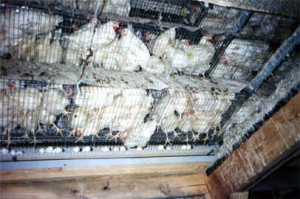 If we “know” that something is wrong and still participate in it, then we are part of that sinful act, and doing something that born again Christians should not do. As an example, in 1995, Opinion Research Corporation conducted a survey and found out that ninety-five percent of Americans disapproved of confinement methods of raising chickens for eggs (photo-left), calves for veal (photo below-left – Note the chain around the calf’s neck to keep it from moving), and pigs (gestation crate photo-below). 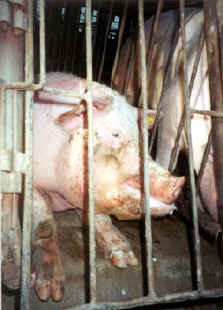 Even though this is what the people said, the confinement methods of raising animals has increased to the extent that approximately 10 billion animals suffered and were killed in the in the United States in the year 2000, most having been raised in confinement. Since most people in the United States claim to be Christian, then something is terribly wrong. Too much has been written and talked about for this many Christians to be able to claim a lack of knowledge, ignorance, or that they made a mistake by eating one of these animals or their by-products. This is participating in the brutality and inhumanity inflicted upon these sensitive animals. And in this case, Christians cannot use the excuse that God gave us the concession to eat flesh in Genesis 9:3, because nowhere in the Bible are we given permission to mistreat any animal.

The lack of knowledge, ignorance, and mistake that Wesley is talking about is the kind that occurs in complete innocence, which is the opposite of the above example. 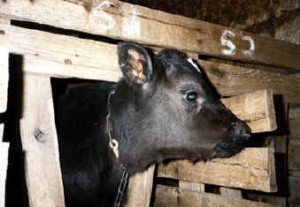 If perhaps, in complete innocence, someone was participating in the inhumane treatment of these animals by eating their flesh and by-products, now, having learned of these things, such a person no longer has any excuse.

In the 11 June 1747 letter to Dr. Gibson (mentioned above), Wesley also discussed why he ate a vegetarian diet for reasons of health. He did it to eliminate the infirmities and imperfections within his earthly body. And today we know that over 90% of all chronic diseases are preventable through changes in lifestyle and diet, which confirms Wesley’s and his doctor’s “knowledgeable” understanding so many years earlier. Wesley wrote:

By ‘extraordinary strictnesses and severities,’ I presume your Lordship means the abstaining from wine and animal food; which, it is sure, Christianity does not require. But if you do, I fear your Lordship is not thoroughly informed of the matter of fact. I began to do this about twelve years ago, when I had no thought of ‘annoying parochial ministers,’ or of ‘captivating’ any ‘people’ thereby, unless it were the Chicasaw or Choctaw Indians. But I resumed the use of them both, about two years after, for the sake of some who thought I made it a point of conscience; telling them, ‘I will eat flesh while the world standeth’ rather than ‘make my brother to offend.’ Dr. Cheyne advised me to leave them off again, assuring me, ‘Till you do, you will never be free from fevers.’ And since I have taken his advice, I have been free (blessed be God) from all bodily disorders.

The people of the corrupt and sinful world, including some of the “Christians” who remain in it, as Wesley mentions above, want us to be like them, and not live in the perfect will of God. John Wesley eliminated the infirmities of his body through the knowledge that animal flesh and by-products are a major cause of chronic illnesses. This is another area where more perfect knowledge can eliminate some of the imperfections within our earthly physical bodies and make us a more perfect Christian.

We could go on and on with examples of how to eliminate our ignorance and many earthly imperfections, but the key is in our seeking Christian perfection; for as we do, we will find the Holy Spirit guiding us away from the imperfection of this physical world.

Go on to: Christian Perfection – 14: In What Sense Christians Are Perfect