You are here: Home › Vegan Connection – Farm and Earthlings

By Kimberly Hosler on January 30, 2017 in Vegan Living 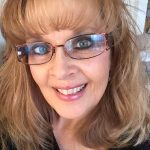 Vegan Connection is the story of my becoming a vegan and living it.

I’ve always been vegan, but I just didn’t put it into action until I was in my forties. I grew up on a farm until I was 10 years old. We had cows, sheep, chickens, barn cats, a horse called Sunday, a goat I named Nanny, Buddy the bunny, and Drummer, our family dog.

Drummer was this frisky yet protective Airedale Terrier. My younger sister and I would think he was basking in sunlight dreaming doggie dreams and not paying attention to us but as soon as we relocated to another location on the property, he followed us, never keeping us out of his sight. We often would find him playing a game of chase with Sunday. I can remember seeing him tug on her tail to get her to chase him around the pasture! She would chase him a bit then stop. Drummer would turn around and give her the stance dogs make when they are playing. I bet you know the one, where they get down on their front paws with their hind end up and tail wagging. She would ‘nay’ and take off running and Drummer would chase her.

Drummer also loved to play with all the other animals on the farm. He could be seen in the cow pasture summoning the cows to a game of chase like he did with Sunday though they didn’t oblige him but the cats and Nanny, my goat joined in his frolicking antics.

More About Life on the Farm

In the mornings, one of my chores was to go to the henhouse to collect the eggs. It always took me extra time because I would pet and play with the chickens. They are very affectionate and quirky little beings. Sadly, I didn’t make the connection that I was stealing their eggs. I would go out in the barn with my dad as he milked the cows. We only had a couple of cows so he milked them by hand, not a machine. He even showed me how to manipulate the milk out of their utters. And sadly again, I didn’t make the connection that we were stealing their milk.

I was witness to the birth of many animals from the chicks hatching to calves being born. New life was always exciting! But I was also witness to death. I can still vividly remember seeing my father and grandfather shooting a bull to be butchered. I was mortified, and I went to my room, sobbing. Yet, I still didn’t make the connection that my dinner that evening was the bull I sobbed over.

After we moved off of the farm, I continued to be surrounded by animals. I had guinea pigs, ducks, cats, rabbits, and we always had a dog. My father was an avid hunter but I could never look at the animals that he killed. Yet. I still didn’t make the connection.

It wasn’t until I was in my forties. I was diagnosed with lactose intolerance. I was scouring the internet for ideas and recommendations on how I was going to live a dairy free life.

Somehow I stumbled upon the movie Earthlings. I clicked on it. Within minutes I stopped the movie as I sobbed uncontrollably. I knew I had to finish watching the movie. It took me three separate attempts but I finished watching it. After that I cried for days.

I was at Wendy’s a week later with some friends and had ordered a chicken fillet sandwich. I sat there staring at the sandwich, but I couldn’t eat it. My friends inquired as to why I was just sitting there. I didn’t know how to explain to my friends what was happening within me so I said I was not feeling well. What was happening inside me was I had finally MADE the connection. I went home and emptied my cupboards of all animal products and went vegan. That was almost 10 years ago and I have not regretted it! I only wish I had made the connection sooner.