This quick and easy vegan apple cinnamon raisin cake can be made in about 30 minutes. 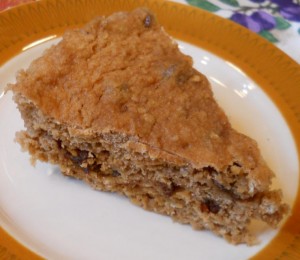 This quick and easy vegan apple cinnamon raisin cake can be made in about 30 minutes, and can be baked in either a conventional oven at 350 degrees F. for about 25 minutes, or in a microwave oven in 12 minutes at 1000 watts. It’s great for breakfast, dessert, or as a snack anytime, and leftovers can be stored in the covered baking dish in the refrigerator for a few days.

If you don’t have oat flour, you can grind rolled oats in a blender or food processor.  Or, if you grind your own grain as we do in our Vita-Mix, you can grind the spelt and oats together in the dry container. Another option is to just add quick oats to the flour without grinding the oats.

Wash and clean the apples, remove the core from the apples, and cut them into pieces.  Place the pieces in the container of a high speed blender (Vita-Mix type).  If you are concerned that the finished volume may be less than 3 cups, you can add another apple after the initial mixing.   Add the pitted dates, cover, and run the blender at high speed until the contents become a smooth puree of 3 cups or a little less in volume.  Additional apples can be added if the volume is less.

Place the flour in a mixing bowl.  Add the cinnamon and baking powder, mix together thoroughly, add the raisins and mix well making sure that there are no raisin clumps, and that each raisin is coated with the flour mixture.

Lightly oil a two quart glass covered baking dish, if you wish to serve the cake on a plate; otherwise, we omit the oil, and cut the cake into wedges in the baking dish, and carefully lift out each piece with a flat table knife.

Add the apple and date puree to the flour in the mixing bowl, and mix together thoroughly but quickly since the baking powder is beginning to react, and transfer the contents of the mixing bowl into the baking dish.  Smooth to the edges, cover and place in the oven to bake.  We bake this recipe in our microwave oven in about 12 minutes.

When there are bubbles boiling up the sides of the apple cinnamon raisin cake and the surface is springy to the touch, remove the cake from the oven with pot holders, and lift it up to make sure the bottom is cooked; if not, bake for another minute or two, and then let it cool on a wire rack with the cover remaining on the baking dish.

Christian Perfection – 29: Singing Our Prayers for Perfection
I Do Not Know How to Speak